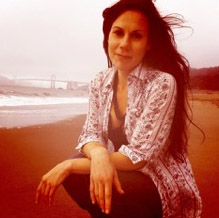 Jennifer Foerster is an alumna of the Institute of American Indian Arts and received her MFA from the Vermont College of the Fine Arts. She has received a Lannan Foundation Writing Residency Fellowship and was a Wallace Stegner Fellow in Poetry at Stanford University from 2008-2010. A Mvskoke citizen, Jennifer has lived in Santa Fe and San Francisco where she worked as a grant writer and non-profit development consultant. She is now pursuing her PhD at the University of Denver. Her first book of poems, Leaving Tulsa, was published by the University of Arizona Press in 2013, and was a Shortlist Finalist for the 2014 PEN Open Book Award. Her poems have recently appeared in Colorado Review, Eleven Eleven, Visible Binary, The Brooklyn Rail, and OAR.