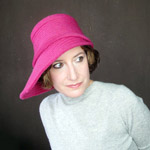 Terry Graziano combines her award-winning background in fashion and costume design to create subtly dramatic hats engineered to be worn many different ways. Born and raised in New Jersey, she spent many years living and working in Philadelphia, New York and Chicago, before moving to Taos, New Mexico in 2014.  Her hats have been sold through boutiques, art galleries, and retail shows, as well as to private clients in over 40 states and 22 countries.  Terry’s work has been featured on television, numerous blogs, and in many print publications including Women’s Wear Daily, Ebony Magazine, Nylon, Time Out NY, Blos Holland, The Hat Magazine, and The Taos News.