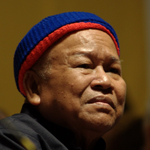 U Sam Oeur was a farmer boy born on March 24, 1936 at Thlok, Svay Rieng Province, Cambodia where he was educated under the  French educational system. After high school, he was sent to the United States by USAID where he  earned his BA in Industrial Education in 1965. In 1968 U Sam earned his MFA from the University of Iowa, then returned to Cambodia. In 1972, President Lon Nol  nominated U Sam as Secretary General of the Khmer League for Freedom, member of the World Anti-Communist League. He was a prisoner of war from 1975 to 1979 under the Khmer Rouge Era.  Since returning to the U.S. in 1992, U Sam has published two books: a collection of poems, “SACRED VOWS,” and his memoir, “CROSSING THREE WILDERNESSES.”  His poetry is published both nationally and internationally. U Sam now lives in Dallas, where he is currently translating into Khmer Walt Whitman’s poems: “Song of Myself,” “When Lilacs Last in the Dooryard Bloom’d,” “We Hear America Singing,” and “Crossing Brooklyn Ferry.”