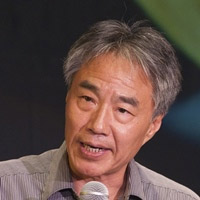 Yan  Li (painter, poet,writer China; b. 1954, Beijing) is a member of a group of artists known as The Stars; as a poet, he is identified with the Misty Poets; he moved to New York from Beijing on 1985, and in 1987 founded Yi-Hang in New York, a quarterly journal that features the works of contemporary Chinese poets as well as translations of American poems. His poems have been translated into French, Italian, English, Swedish, Korean，Iranian and German. He has held many exhibitions and published numerous books. The last poetry appears in an anthology Language for a New Century, published by W. W. Norton.2008。 He lives in Shanghai and New York now.