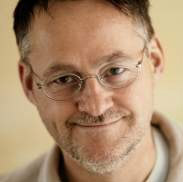 Niels Hav is a Danish poet, is the author of seven collections of poetry and three books of short fiction. His books have been translated into numerous languages including Portuguese, Dutch, Arabic, Turkish, English, Serbian, Kurdish, Albanian and Farsi. His poems and stories are published in many journals, magazines and newspapers around the world. He has frequently been interviewed by the media, as he has travelled widely in Europe, Asia, Africa, North and South America. Today Niels resides in the most colourful part of the Danish capital, Copenhagen. Niels’ most recent book Moments of Happiness was published by Anvil Press in Vancouver.

“…one of Denmark’s most talented living poets…”