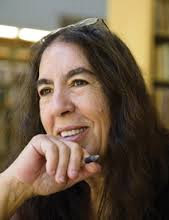 Rebecca Seiferle’s last poetry collection Wild Tongue (Copper Canyon, 2007) won the 2008 Grub Street National Book Prize in Poetry. Her three previous collections, Bitters, The Music We Dance To and The Ripped-Out Seam won the Western States Book Award, a Pushcart Prize, The National Writer’s Union Prize, and the Poets & Writers Exchange Award. Seiferle is also a noted translator from the Spanish; Copper Canyon Press published her translation of Vallejo’s The Black Heralds in 2003, and her translation of Vallejo’s Trilce (Sheep Meadow Press, 1992) was a finalist for the PenWest Translation Award. She is the founding editor of the online international poetry magazine www.thedrunkenboat.com. She is the recipient of the 2004 Lannan Literary Fellowship for Poetry. In 2012 Seiferle was named Tucson Poet Laureate.

After the Myth
xxvi